The lunacy of a Car Scrappage Scheme

It’s looking more and more likely that the government’s resident badger impressionist, Alistair Darling, is going to announce on April 22nd that old cars (over 10 years) scrapped when a new car is bought will get the owner a £2,000 incentive. Other European countries have implemented similar schemes – in Germany, for example, car sales increased by 40% in March compared with a year earlier.

Compare that with the UK where new car sales fell again in March with new registrations down 30.5 percent against March 2008. And assumming a new car typically costs about £16,000 so the government won’t even be out of pocket (VAT alone is £2,400 before road tax etc), so why is this idea straight from the “MG Rover” department of naivity and idiocy?

However, manufacturers are also getting much better at tuning their car’s to perform well in the standard EU test cycle. With modern fuel injection systems, it’s simple to tune a car for ecomony at test speeds, yet still be able to publish good horsepower figures for selling cars. So anyone who believed we’ve really seen a true 17% improvement in CO2 for Ford Foci in 7 years is kidding themselves.

The SMMT shows that the average g/km of new cars sold in the UK between 1999 and Q2 2008 has dropped from 190 g/km to just 160 g/km today. Very admirable, however we need to remember these are “new” cars. And in 1999 people were buying 4x4s like hot cakes. Today though, the SUV / 4×4 has become ostracised from society and sales have fallen off a cliff. In fact the only area of the car market that’s growing is small cars, and they always have a low g/km figure. So of those 30g/km reduction, probably half of it is as a result of cars becoming more efficient, rather than an overall shift in buying trends away from 4x4s to smaller cars. 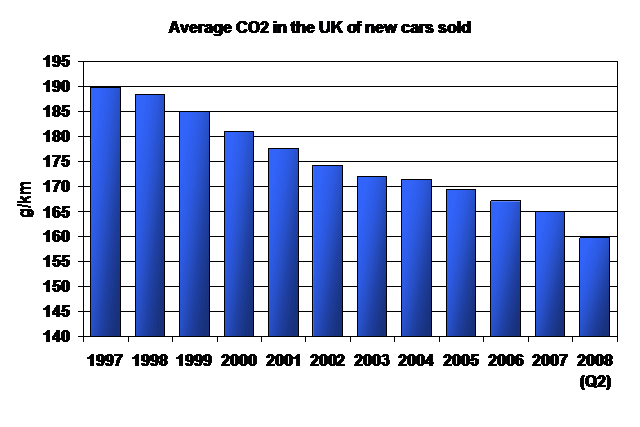 We also need to remember the CO2 required to build the car. There are a variety of sources for this, from the energy required to build the car (welding / pressing etc), the energy required for production of parts from raw materials and even the footprint required to scrap and recycle a vehicle. The SMMT (Society for Motor Manufacturers and Traders) gives an official figure of about a tonne of CO2 for this whole process. This is widely believed to be far too low.

So let’s say that 1000kg of CO2 is created building a new car, that’s 1,000,000 g of CO2. And lets say that 30g/km is actually saved by getting a newer, smaller, more efficient car through the scrappage scheme. To offset the impact of manufacturing would take a minimum of 20,000 miles of driving, or almost one complete lap of the earth.

There is no doubt that the economy is the primary focus here, and the government are desperately trying to shore up what remains of the British motor industry. However, 85% of the cars sold in the country are imported from abroad. So if you were really trying to help the British industry, you’d be better taking the protectionist route and giving a subsidy just for British built vehicles of….£13,333. And we should also remember that evidence in Germany has shown people are buying smaller cars (for example the VW Polo – ironically built for VW in Spain), and in the UK we manufacture just 2 small cars, the Mini and the Nissan Micra, which together make up just 5% of the UK market. So most of the public money spent will benefit other nations, rather than our own motor industry. 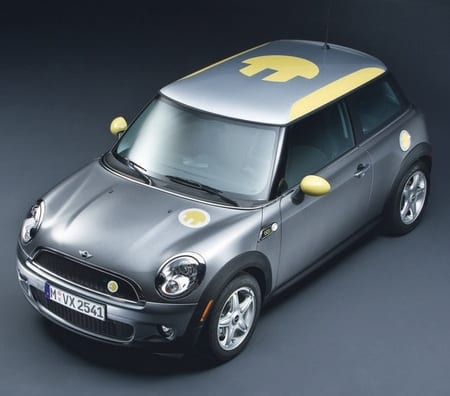 And what about the miriad of garages and parts manufacturers who keep the older cars running? 95% are based in the UK, and the plethora of new cars on the road will put many more of them out of business. 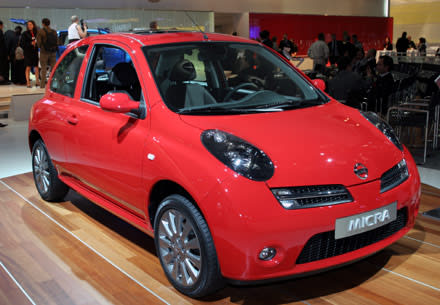 Here’s the kicker with new cars. Some cars can loose 50% of their value in the first year of registration. And this is only going to get worse – what is the market for a 1 year old car going to be like if you can get £2,000 off a new one?

And your £2,000 saving? The moment you drive off the forecourt that will be lost in depreciation anyway.

And this is the big one that everyone appears to have missed. This is not a scheme that can last forever, as there is no reason why the government should subsidise one industry (making up a relatively small part of our economy nowadays) while others feel the pain of a recession. All it will do is create a “Christmas / January Sales” effect pushing the problem down the line where everyone shops now, then the market dries up requiring huge discounting just to get any sales at all. No doubt there will be a strong take-up initially (who doesn’t want £2,000 free from the government coffers?), and people are already holding off buying new cars on the expectation of the grant, further hurting the industry (why would you buy now anyway if this is coming?). But what happens next? All the grants are given out, then what? An even worse drought in car sales, that’s what.

The likely end result is that we will have a short term “blip” in sales (just like Germany’s 40% jump), and an even bigger downturn in the long run. This could hurt the industry far more in the long run than the current “dry-patch”…

So what do we do?

So what should we do? Simple, take the estimated £1bn earmarked for the scheme and invest in research and development in the UK. That’s enough to create jobs for 10,000 people for 3 years developing the new technologies required for the drastic advances needed in automotive technology. The sad truth is that the UK’s cost base is never going to be able to complete with developing nations in manufacturing cars in the long term. Maybe today, yes, but not in 10 years. To really help the industry we need to be at the cutting edge of plug in hybrids, lightweight manufacturing techniques and the next generation of vehicles. The internal combustion engine has done well for us for 100 years, but it’s becoming increasingly clear that in it’s current form, it has a finite life span, and if the government wants to have a UK motor industry it needs to get ahead of the curve and be at the cutting edge of the next generation of cars.